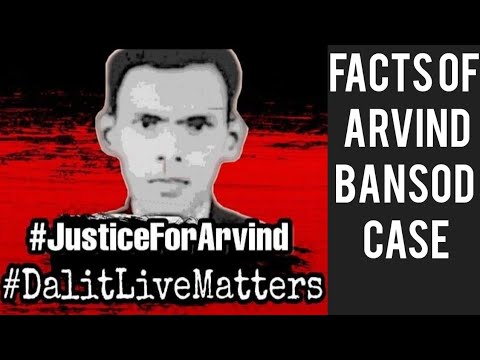 A highly educated social activist of Vanchit Bahujan Aghadi Arvind Bansod (32) , Nagpur (resident of Pimpaldhara, Taluka. Narkhed) death is suspicious , the police administration is trying to suppress the case by registering the death as suicide without proper investigation.

“Arvind Bansod and his two colleagues had gone to the bank on May 27 to withdraw money. Bansode’s colleague was taking a photo of the agency’s board as he wanted the HP Gas Agency number. ‘Why you take a photo?’ the goons in the agency snatched his mobile. When Arvind went inside to get his mobile phone, Mithlesh Umarkar, the owner of the agency, was sitting there. He assaulted Arvind with casteist slurs and threatened to kill him. Arvind kept asking for mobile and Umarkar with his goons kept beating him, Arvind came out and told his colleagues to get out of here, his colleagues went a little sideways. Arvind went inside again, said give the mobile, they took both the mobiles this time and beat Arvind again. As Arvind did not return, his colleagues went inside, while Arvind was found lying on the steps of a nearby gas agency with the pesticide lying on his side. As people gathered at the spot, accused Mithlesh Umarkar threw Arvind in a car and took him to the hospital and also took pesticide with him. Again, no one knows what happened to him in the car,” incident described in Adv. Prakash Ambedkar FB Post

Arvind’s colleagues and brothers do not believe that Arvind Bansod will end his life by drinking poison. While the whole case is suspicious and there is a strong possibility that Arvind was killed, the police have registered case as suicide. Arvind, a social worker, was in a precarious financial situation and was breadwinner of the entire family. Arvind was preparing for the MPSC and at the same time was working for the poor people with inspiration of Dr. Babasaheb Ambedkar. Why does a Scheduled Caste-Scheduled Tribe activist ask question the system? Arvind’s close associates have alleged that he was killed out of anger.

“The accused’s father Bandopant Umarkar is the Nagpur district vice-president of the NCP, while the accused NCP youth leader is a member of the Panchayat Samiti. It is also understood that accused Mithilesh Umarkar is close to Home Minister Anil Deshmukh. Therefore, large-scale political pressure is being exerted to save the accused. In this case, action has been taken under sections 306 and 34 of the Penal Code. If injustice is being done in the constituency of NCP ministers to social activists who is Scheduled Caste , then this matter is very worrying. The Vanchit Bahujan Aghadi is appealing to the Chief Minister to pay immediate attention to this matter and accept the following demands,” Adv. Prakash Ambedkar VBA National President Said.

1) To file an offense under “Atrocities (Prevention of Atrocities against Scheduled Castes / Scheduled Tribes Act, 1989)” for insulting with casteist slurs and insulting public places.

3) Without informing the family and forbidding his friend Gajanan Raut to get in the car, accuse took Arvind Bansod to the hospital alone. The police should conduct a thorough inquiry in this regard and find out the truth about what happened to Arvind in the car.

4) Accused Mithilesh Umarkar should be traced and co-accused should be found.

5) As Gajanan Raut, a friend of the deceased Arvind, is an eyewitness, it is legally binding to record his statement.

7) The post of Panchayat Committee member of accused ‘Mithilesh alias Mayur Bandopant Umarkar’ should be canceled.

8) The role of the local Jalalkheda police station is questionable and due to the influence of political background, initially police refusal to register a complaint and even after a week NO simple interrogation / arrest of the accused done , the concerned Police should be suspended.